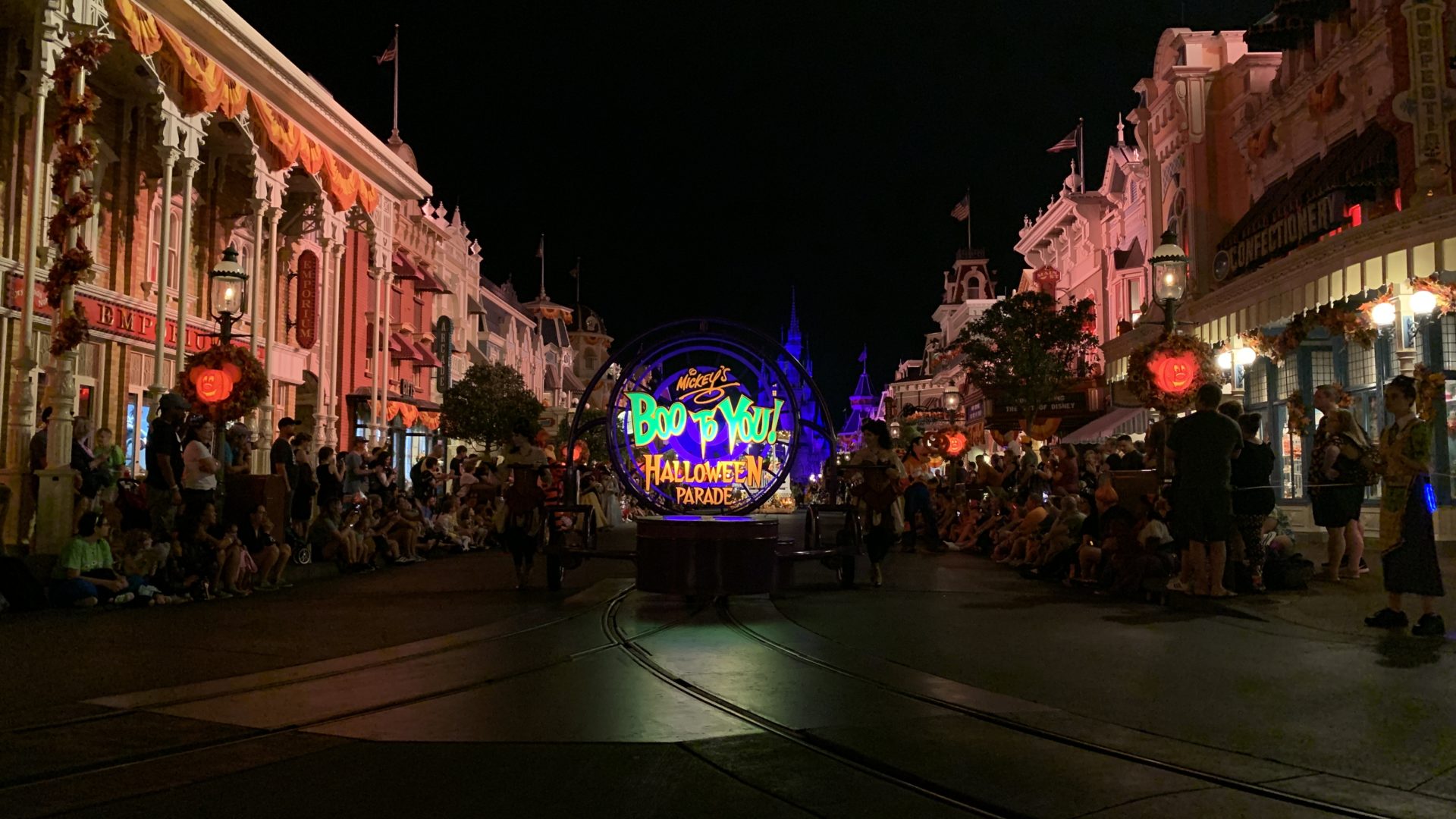 We recently went to Mickey’s Not So Scary Halloween Party and had an absolute blast. We actually hadn’t planned to go this year after a not so magical time last year, however, our son has become OBSESSED with all things Halloween. After seeing a commercial on Disney Junior, he started asking to go to Not So Scary and since we already had a trip planned to go to Sea World, we simply added a day.

So last year, we went to the first party of the season…..in August! We didn’t go to Walt Disney World just for the party, but had scheduled a quick weekend trip and decided to go to the first party a few weeks before. It was the first night of our trip which was our first mistake. Our second was that we all went in full costume. When we arrived at the park it was 96 degrees. When the sun went down, it got to 92. It was miserable. Now we live in South Florida, so if we say it’s hot, it must be really hot. Next, the party was officially sold out and seemed to have been oversold. It was media night and I personally do not think any of the media and bloggers that received comp tickets were counted. We waited an hour for the first parade for semi decent seats and left shortly thereafter. It was not a magical night.

So when our son started asking this year to go, we thought long and hard. We were already going to Orlando in October for our annual Sea World trip and I saw that there were parties on that Monday (Columbus Day) & Tuesday night. Since we were going to Sea World on Columbus Day, it made sense to go to the party on Tuesday night. So we bit the bullet, added the extra night and bought tickets.

We went to Disney’s Hollywood Studios earlier in the morning to see Galaxy’s Edge and when we got back to our room, our son REFUSED to nap. He finally fell asleep at 3pm, so our plan to get there early quickly went out the window. This ended up being a blessing in disguise. We finally got to the park at 6:15pm. Our only plan was that we had booked Cruella’s Halloween Hide-A-Way at 9:30pm, so we had reserve seating for the 2nd parade and we knew we wanted to be near the hub for the fireworks so our son could see the Jack Skellington puppet.

We went to eat a quick dinner at Columbia Harbor House and then rode Haunted Mansion. What’s a Halloween Party without a ride on Haunted Mansion??? Next up was trick or treating. It was already obvious to us that this party was a lot less crowded than the year before. Our son loved trick or treating and we covered all of Frontierland and Adventureland. Next up was a ride on Pirates of the Caribbean, one of our son’s favorites. The line wasn’t too bad despite it having an overlay, which was really only a few actors. A nice touch, but not worth waiting for if there are other things you want to do.

After that, we hit up a few more TOT spots and then headed to see Mickey Mouse. Our son wanted to dress up as Vampire Mickey Mouse since the day he asked to go to the party. Now, there is no Vampire Mickey Mouse costume sold and when I tried to buy a regular Vampire costume and put Mickey ears on my son, he quickly told me NO, this is not Mickey’s Costume. He wanted to MATCH Mickey, so I enlisted my mother to try and make the costume. There’s a whole story there which I will not get into, but needless to say, she did make the vest and pants and I somehow managed to make the Vampire cape the day before we left. However, all the stress that went into making that costume went away when he saw Mickey Mouse and they matched! It was awesome. I will also say that he did get a lot of special attention from cast members throughout the party who recognized that his costume was a replica of Mickey’s.

The check in time for the Cruella party was 9:30pm, and even though it was only 9:15pm, we were allowed in. I will write a separate post about the party later, but I will say that we loved it. It was a great break from running around Magic Kingdom and gave us a chance to just sit and relax for a bit. Since we got there early, we were able to get a table outside on the patio and we decided to watch the first parade from there, mainly because we didn’t feel like fighting the crowds on Main Street to go anywhere else. I really wished they kept the bias open past 8pm.

After the parade, we headed up to the Hub to watch the fireworks which were about to start. We got there just as they opened up the ropes to start letting more people in, so we got a good spot and close enough to see Jack. the new fireworks were great and our son really loved them. The projections are amazing. After the fireworks we headed to Tomorrowland and as we approached Buzz Lightyear Space Ranger Spin, our son jumped out of his stroller and ran towards it. Fortunately, it was a walk-on. After the ride, we saw Lotso and his line was extremely short. So we waited about 5 minutes to meet him, which was a nice unexpected surprise. Next up, was the Monsters Inc Dance Party. Once again, our son saw the dancing and jumped out of his stroller. I never understood dance parties until I had a toddler and now I TOTALLY get them. We stayed here for a while until it was time to head back to the Cruella Party. As we were walking back, we saw the Headless Horseman come down Main Street. I’ve seen him before but never on Main Street which I thought was incredible. We got back to the party around 11:15pm and even though that is the start time of the parade, it really doesn’t get there until after 11:40pm. We enjoyed some more food and drinks and then headed out to the reserved area just in time for the Zootopia Conga Line. After that, we went to sit down and found seats on the curb almost dead center on Main Street. I cannot tell you how incredible it is to see the parade from this vantage point. I will go more in depth in my review of the Cruella Party.

After the parade we decided to go and watch the last stage show which starts at midnight. Surprisingly it was still pretty packed, but we were able to get close enough for a decent view. I have to admit, I’ve never seen Hocus Pocus, but I still enjoyed the show very much, as did my son.

And that was it, we literally closed the park down. I don’t think we would have made it as late as we did if we had gotten there at 4pm like we originally planned. We never did make it to Fantasyland, but I think they ended up being a good thing. I typically have a whole itinerary planned out, so not having one let us enjoy the night as it happened. It also allowed our son to tell us what HE wanted to do. This was the first time he was telling us where he wanted to go and who he wanted to see, which was a new experience for us.

So do we plan on going back to the Halloween Party? Absolutely! However, I do think we will try and go on a night that isn’t sold out, because it was a much more pleasant experience.