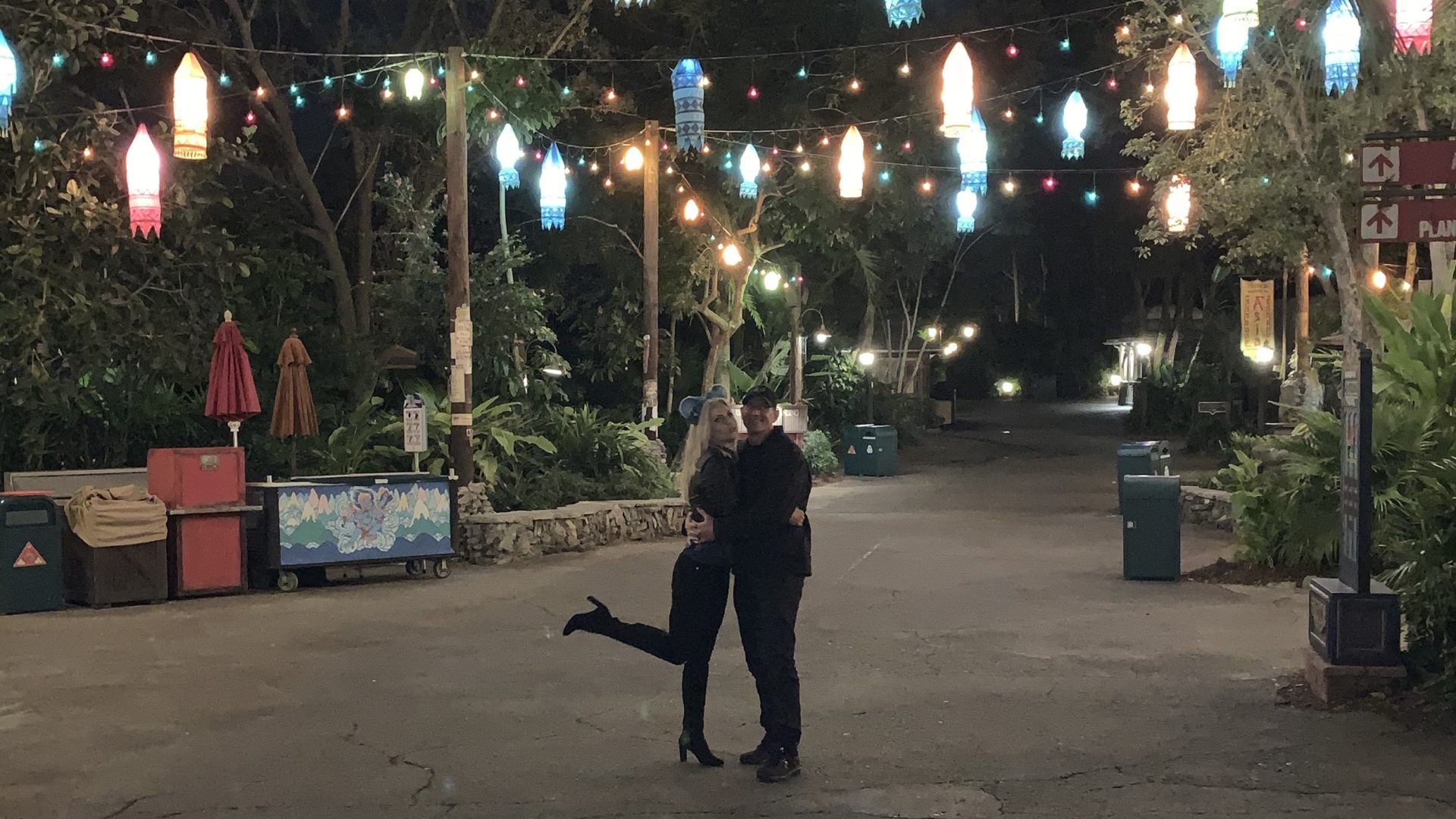 On Wednesday, December 12th, my husband and I attended the 2nd ever Disney After Hours At Disney’s Animal Kingdom. This was only announced a few weeks before our trip and I had to move around some things to make it work, but we did and it was totally worth it.

We didn’t arrive to Animal Kingdom until just before the official start time of 8:30pm. We had dinner at Chef Mickey’s and had to get back to our room at the Polynesian to drop off our son, meet up with the babysitter we hired and then drive to Animal Kingdom. Fortunately, everything fell into place time-wise and we were able to get to the park by the start of the event.

Now, since we have a 3 year old, we haven’t ridden Dinosaur or Expedition Everest in several years. We have each ridden Flight of Passage 6-7 times each, but never together. Our planned Animal Kingdom day was the following day and we did have a Flight of Passage fast pass, but by attending this event, we were able to ride it together and it allowed us more time to enjoy the things my son enjoys most.

As I stated, we arrived at the entrance of the park at 8:27pm. Unlike the Magic Kingdom After Hours where we were given a lanyard, here we were given wristbands. And unlike at Magic Kingdom, there was not one photopass photographer the entire night. This is really my only complaint, even if they had just one photographer as you enter the park, I would have liked one photopass photo from the night. Anyway, we headed straight to Dinosaur. Now, I like Dinosaur, I always have, but it’s been several years since I’ve been on it. We entered the building at 8:33pm and immediately went into the pre-show. We were loading by 8:39pm and the time stamp on our first picture is 8:44pm. When we went to unload, we were asked if we wanted to ride again. The couple next to us got off but everyone else stayed on. There was some technical difficulty in getting the car moving again, but our 2nd time stamp was 8:52pm. Once again, when we went to unload, cast members asked if we wanted to ride again, and this time only my husband and I stayed. This was actually my goal, to have a picture of just us. Our third and final time stamp was 8:57pm.

After leaving Dinosaur, we ran into the Dinoland Dance Party. This was super fun and Chip n Dale were very engaging. I really wish Primeval Whirl was open because I am one of the few who likes this ride. However, it was not, so if you want to ride it, try and get there before park close and ride it then.
While walking over to Expedition Everest, we happened upon Rivers of Light. We stayed for about 5 minutes to watch, which was enough for us. Surprisingly, there was quite a few people there watching.

We arrived at Expedition Everest at 9:12pm and were boarding the last row by 9:15pm. We entered again for Round 2 at 9:20pm and this time we opted for the front row. Now I don’t think I’ve ever ridden Everest in the front row and this is where it’s at. Even though it was 45 degrees and the front row wind chill factor was freaking freezing, but it was still awesome.

After Round 2, we decided we needed to warm up. They were handing out hot chocolate, but instead we chose to do Tequila shots. And we were not the only ones. This was the main difference between this After Hours and the one at Magic Kingdom. It seemed more like an adult crowd and a relaxed, somewhat party atmosphere.

After our shots, my hubby decided to grab a Mickey bar, because why not and then we headed back for Round 3! We chose to ride in the front row once again and this time, were the only people in the ENTIRE ride. That was awesome.

We left the ride at 9:53pm
We decided it was time to head to Pandora. On the way, we saw this beautiful lit area and decided to take a quick picture (see featured photo) Disney, please add a photopass photographer here, it’s so pretty.

We entered Pandora at 10:02pm and were boarding Na’vi River Journey at 10:05pm. Now I didn’t time the actual ride, but the ride seemed to be a lot slower. We rode it the following day with our son and it was definitely much faster the next day. We exited the ride at 10:13pm and entered Flight of Passage at 10:15pm.

We entered the preshow area at 10:19pm and were the first ones in the room and did have to wait for them to fill the room. I estimate that we started the ride at 10:30pm and were exiting at 10:35pm. Now as we were exiting, I asked the cast member if we could ride again and she told us to wait there, then walked us back to the ramp area. So we did have to watch the preshow again, but we didn’t have to exit the attraction and then reenter through the queue which probably saved us quite a bit of time. We boarded our Banshees for Round 2 at 10:46pm.

We exited Flight of Passage at 10:56pm and decided to call it a night. We had done everything we wanted and more. All in all, we really liked this event. It had a much different feel than the After Hours At Magic Kingdom, probably because there are less attractions so it’s more relaxed and well, alcohol. This event was perfect for us as we did return to Animal Kingdom the following day and did much of the stuff that was closed during After Hours like Kilimanjaro Safaris and Festival of the Lion King. If you are thinking of doing After Hours instead of a regular park day, you will miss a lot, but it will also depend on your priorities.

Will we do this event again? I’m not sure. While we enjoyed it immensely, there’s simply not enough open to warrant a second visit. However, maybe in a few years when our son is old enough to ride all the attractions, we will go back…minus the tequila shots.

My Pandora ears are by We’ve Got Ears

To book Disney After Hours – Animal Kingdom go to: https://disneyworld.disney.go.com/events-tours/animal-kingdom/animal-kingdom-after-hours/

Below is my video from the event